It started with an “oh no”.

Specifically, a long-running web series by artist Alex Norris called, well, Webcomic Name, in which every single scenario would end with the punchline “oh no.” It’s one of the most popular webcomics on Twitter with 262,000 followers and he is now speaking at conferences across the world.

Rewind back to January 2018. Having recently come out of a post graduate funk and grappling with the realities of employed life, I made a resolution: I couldn’t give up on being creative. If anything was going to get me through the long and often mindless hours of excel spreadsheets and dumb emails,  I had to rediscover my hobbies, one of which being drawing.

The fact is there are so many amazing illustrators online, it can be hard to start when you know you have neither the skill nor equipment to achieve that. It is no secret that the art industry is mainly for the rich, with a lot of state schools having to cut arts GCSES and funding. However, this is where webcomics came in.

I discovered webcomics on twitter the same way everyone did (silly, silly memes) and something appealed to me instantly. Not only did they contain often a weird, visual humour which performing comedy often lacks but it seemed…accessible.  Whilst this is not to say the illustrators themselves aren’t extremely talented but the simplicity of the style means that most people can join in, often with a range of media too. In my case, the humble pen and paper. I looked at the “oh no” comics and thought “I could do that”. It’s like when you are in the pub with your smarter friends and a subject you know comes up and you can FINALLY join in the conversation.

I went out and bought a cheap pack of coloured felt tips and a sketchbook from WHSmith . I started doodling. I tested various ways to draw myself. I made notes of all my odd thoughts in notebooks and post-it notes scattered everywhere. Eventually I drew my first comic. 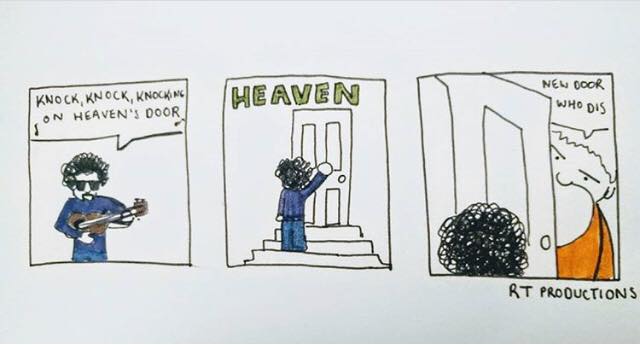 Believe it or not you too could make something like this

Is it the best joke I’ve ever made? Almost definitely not.

However it was something. Friends reacted way more than I thought I would. People even seemed to like it. As time went on, the comics continued to allow me to test jokes I thought may be too weird or loose thoughts that needed putting down somewhere. They allowed me to learn and practice technical skills (guess who can finally use the magnetic lasso on Photoshop?). Most importantly, I was finally starting to develop my own style, something I had been wanting for years. 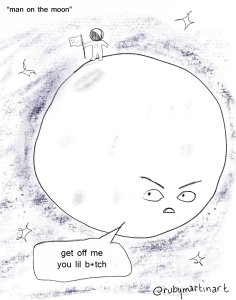 This opened a floodgate.  Not only did I gain followers and join in conversations I never thought I could, but it gave me confidence and discipline to start doing other creative things. I started writing articles for Succubus, a satirical women’s magazine (which also helped me make a lovely community of online friends). I started my own podcast with one of my best friends (which you can all listen to here, cough cough). I even wrote a fricking play (which may still never see the light of day.) It’s started a flow which I can’t stop.

People started liking my work enough to the point I have even started designing posters, business cards and commissions. I sold a bag with one of my designs on it.

It may be nothing massive but the confirmation that finally people will pay for your art is pretty damn good. However. more importantly, it gives you a confidence to keep going and trying and putting it out there, no matter how shitty you think it is.

It has gotten to the point where I haven’t released a comic in a while, but only because I have been so busy getting several, much bigger projects up and rolling, this magazine being one of them.

Now I have set up my own arts and crafts comedy night, Comical which is something January me could have only dreamed of. The point? I want to help everyone make shitty cartoons of their own. After all, if it helps one person gain the confidence to put their artwork out there,  it will be worth it.

View all posts by Trashfire Magazine